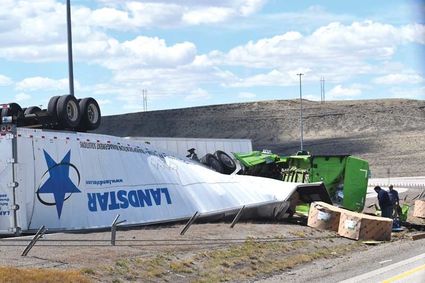 The semi-truck that Valley resident Jimmy Campbell helped rescue the driver of on Interstate 80 outside of Sinclair.

On Wednesday, around 2:30 p.m., a semi-truck was cut off by a car near the Sinclair exit going eastbound on Interstate 80 and crashed between the highways. The cab looked like a giant had stomped on it.

The car that caused the accident did not stop, but others did immediately. Some of those were Valley residents.

Saratoga resident James "Jimmy" Campbell and his wife, Jaimie, were on their way to Rawlins to do some shopping when they witnessed the crash.

Jimmy pulled over his truck immediately and ran to the crushed cab that was turned upside down. Other people stopped to help, but it was J...