Semi-truck splashes into the North Platte River near Fort Steele 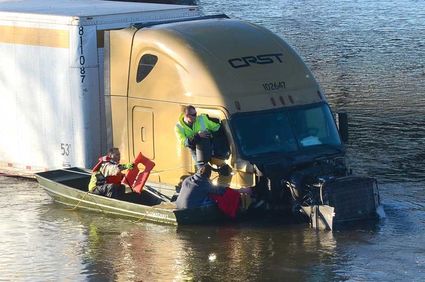 The passenger of the water-bound semitruck climbs through the window on Thursday morning as he is rescued by boat from the North Platte River.

The North Platte River received some unexpected traffic early Thursday, April 9, as a semi-truck and trailer plunged into its frigid waters near Fort Steele. The sight must have been something to behold as vehicles as large as this can weigh up to 80,000 pounds when fully loaded. One could imagine a mighty splash as the truck plunged into the river bed after threading the needle between a tree and the railing of the overpass.

The recovery of the vehicle, however, was not as dramatic, although it did take two tow trucks working in tandem to pull the truck and trailer out of the water. It was a slow process. Search and rescue pulled the driver and passenger from the truck via boat.

At one point a diver was called in to assist in attaching the cables from the tow trucks to the truck and trailer.

The hood floated down river. Search and Rescue lassoed the stray part by the mirror and towed it by boat to shore.

There were many onlookers speculating on the cause of the accident including other professional drivers who were parked at the rest area only a short distance walk to the scene of the crash. 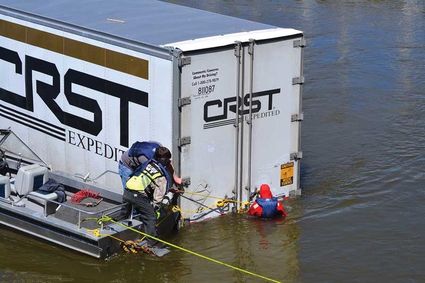 A diver gets into the frigid waters of the North Platte River to hook up cables from the tow trucks.

According to Lt. Tyler Chapman, Wyoming Highway Patrol, the driver was sited for lane use. There was a passenger in the truck who may have been in the sleeper birth at the time of the accident. The only injury was to the passenger's ankle.

By state statute, this was a crash and there is an investigation but it has not yet been completed at the time of print. The cost of the investigation is unknown but there were many agencies involved in the investigation and recovery. Highway Patrol, Search and Rescue, Carbon County Fire Department, Game and Fish, Sinclair Oil and Marathon Oil were all on scene.

When asked what would be important for people to remember about accidents such as this, Lt. Chapman had this to say, "Safe driving is a concern. If people are feeling tired, we would like for them to pull over and get some rest rather than pushing on".