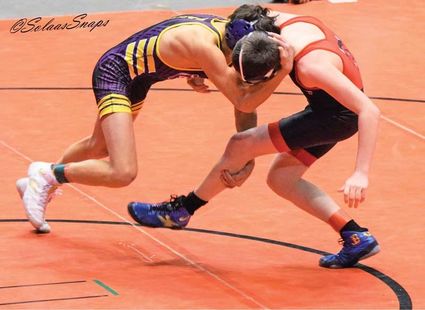 Justin Shotwell, left, attempts to take down a competing wrestler during the State Tournament.

The wrestling season came to a close this weekend in Casper. The Saratoga High School wrestling team came back with a grappler who came in 4th in the 120 pound weight class.

"It was exciting to see Justin dig deep and beat the defending state champ, Nate Boreen from Greybull in the 5th place match," Mason said. "It's not easy making weight and wrestling back on the 2nd day of state, and I was proud that Justin stepped up and gave it his best."

Another wrestler that Mason was proud of was Jerry Everett, altho...