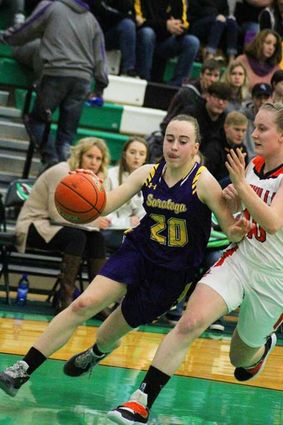 Whitney Bennett (20) works to get the ball past a Lady Huskie in Lander.

The Saratoga Lady Panthers, for the first time in 16 years, are heading to compete in Casper. The last time the Lady Panthers were at the State Tournament was during the 2003-2004 season when they were in the 2A conference. Since then, the Saratoga girls have worked to get back to the Casper Events Center and showcase their talents.

Last year, the Lady Panthers secured a spot at the 1A West Regional Tournament following a pigtail game against the Encampment Lady Tigers and were ultimately eliminated by the Little Snake River Valley Lady Rattlers.

This year went quite different for Saratoga...