Woods get a piece of Western Spirit 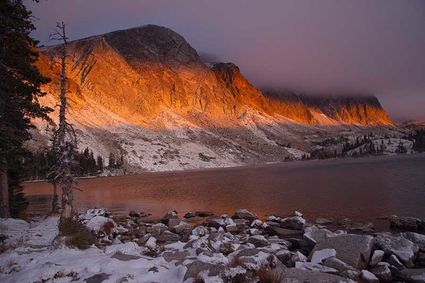 "Glow" provides a rarely seen perspective of Lake Marie and Medicine Bow Peak on Snowy Range outside of Saratoga.

On March 7, the 39th Annual Western Spirit Art Show and Sale in Cheyenne will be holding its opening reception for the 2020 exhibit. Among those featured in the exhibit, which is scheduled to run until April 19, are husband and wife artists Jerry and Elizabeth Wood.

Jerry has been stone carving for 41 years. He was first introduced to the medium when he attended a summer art camp in 1979 and has been stone carving ever since. Before moving to the Valley in 1999, he would attend art shows throughout the West. These included shows in Sedona, Arizona, Loveland, Colorado, and the original Festival of the Arts in Saratoga, Wyoming.

"I got out of doing shows where you have to pack all your work there for a weekend and have since concentrated more on these exhibition shows of where you get juried in and take the piece there rather than staying there with all your artwork for a long weekend or 10 days," said Jerry.

Every artist has their own way of doing their work and Jerry is no different. The sculptor takes the direct carving approach, not planning out any particular shape.

"I start carving and then, as the forms emerge, I make the decision of what I'm going to carve. I let the stone lead me on the process," Jerry said.

Jerry has two stone sculptures in this year's Western Spirit Art Show. One, "Golden Moments", is a woman figured carved out of Costa Rican Alabaster. The other, "Inside Out", is an abstract carved out of Black Soapstone.

The stone sculptor said he is excited about both him and Elizabeth being accepted at the same time into the Western Spirit Art Show rather than just one or the other, like in years past.

Elizabeth has been pursuing photography professionally for approximately five years.

"I didn't have time to do it for the Saratoga Sun because I was always taking pictures for the Sun and that improved my photography skills tremendously," said Elizabeth. "I had wonderful people that worked for me that taught me a lot about taking photos and my husband has always said that I had a good eye but it was just working to get that perfect shot and having the time to do it."

Since leaving the Sun, Elizabeth's new job allows her to spend more time on her professional photography.

"I take my camera with me when I go to work and sometimes I get some glorious shots. Sometimes I get up early in the morning, especially in March and April, to go take pictures of Sage Grouse," said Elizabeth. "I enjoy it. My husband says when he's stone carving he gets into his zone. When I'm taking photographs, I'm in a zone."

Over the past five years that Elizabeth has been submitting her photographs, the pieces that were accepted, including this year, have been of the Snowy Range's Lake Marie. The piece accepted this year is entitled "Glow."

"For some reason, they like my Lake Marie photos and those are the ones that get accepted. I've tried entering other stuff and those have been rejected. I guess they like the light in it because I take early morning photos," Elizabeth said.

While Lake Marie, and Medicine Bow Peak, can be considered iconic locations for southwestern Wyoming, Elizabeth says she believes it is her perspective that has led to her acceptance into the national art show.

"A lot of people take a picture from the same spot, they take it in the harsh of daylight, and I get up at 5:30 in the morning to go up there to wait for the sun to come up. Sometimes I've been lucky and sometimes it's been snowy and a bit gray. Most of the time I've gotten some spectacular red, orangish shots up against Medicine Bow Peak," said Elizabeth. "I just look for a different location to take pictures and move around a little bit."

Elizabeth is quick to credit Jerry for her being able to pursue photography professionally, adding that it is a reciprocation of the support she gave him for several years.

"For years, I've supported my husband and his artwork. I've always taken photographs of the family and I learned how to hone my photography skills taking photos of his artwork and I've always been there for him," Elizabeth said. "Gone to shows with him, helped him photograph his pieces, helped him come up with names and he has been very gracious in return and has helped me build up my inventory and is encouraging and gives me constructive criticism on my photos."

When it comes to artists who may be interested in submitting artwork to the Western Spirit Art Show, the recommendation from the duo is to go for it but to also be happy with your art first.

"Just go for it. It costs $20 to enter each piece. The worst they can do is say no and if you're not willing to accept rejection, then maybe you're in the wrong business," Elizabeth said. "Someone's going to like something that somebody else is not going to like and any show is the perspective of the juror who's judging it."

"You've got to make yourself happy first with what you're doing and also be your own worst critic. Continue to set the bar high for yourself," said Jerry. "I think that comes forth in anybody's artwork, no matter their style or their genre. They're following their vision, making themselves happy and it's icing on the cake when your piece of artwork somehow speaks with somebody else."

The opening reception for the Western Spirit Art Show and Sale will begin at 6 p.m. on March 7 at the Old West Museum at 4610 Carey Ave. in Cheyenne.