Encampment gets three more wins as they end regular season, enter regional tournament as No. 1 seed in southwest 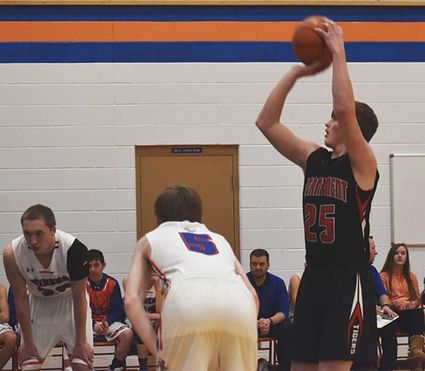 Encampment Tiger Koye Gilbert (25) lines up his shot from the free-throw line during Thursday's game against the Miners.

The Encampment Tigers started their regular season with running clocks and ended it the same way with two of their three games seeing nearly 50-point leads. The three-game weekend will likely serve as good practice for Encampment as they enter the 1A West Regional Tournament as the No. 1 seed for the Southwest.

Beginning with a Thursday win over the Hanna, Elk Mountain and Medicine Bow (HEM) Miners, the Tigers went on to deal devastating losses to the Rock River Longhorns and the North Park Wildcats.

While Encampment has been able to keep practicing this season and saw ve...