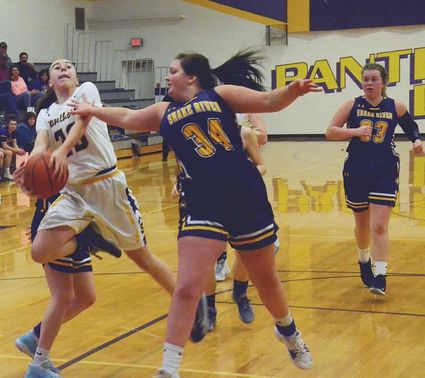 Saratoga Lady Panther Whitney Bennett, left, attemps to get a shot past a player from Little Snake River Valley on Friday evening.

The Saratoga Lady Panthers were dealt a home game heartbreaker for their final game of the regular season as they hosted the Little Snake River Valley (LSRV) Lady Rattlers (12-10, 5-3) on February 21. What started out as a successful game for Saratoga would ultimately end up as a loss for the Lady Panthers.

While Saratoga appeared to have a sluggish start against the Lady Rattlers, a trio of 3-pointers from junior Savannah Wells spurred the Lady Panthers as the 1st quarter ended with an 8 point lead. The Saratoga girls would continue that lead through most of the 2nd quarter but, as half-time approached, LSRV would close that gap.

As the buzzer sounded at the end of the 2nd quarter, LSRV would land a hail mary half court shot and shortened Saratoga's 4 point lead to 29-28. As the Lady Panthers came back onto the court after half-time, the fire they showed on the hardwood in the first 16 minutes had seemingly disappeared.

"In the second half, I just felt like we kind of went cold and didn't shoot that well," Bartlett said. "When we'd get a layup and miss it, we could just never gain any momentum."

By the end of the 3rd quarter, the Lady Rattlers pulled ahead of Saratoga with a 2 point lead. As the 4th quarter started, it seemed that the Lady Panthers continued to struggle against LSRV and to close the widening gap.

"We could never quite get the stuff to fall that we needed to in the second half," said Bartlett. "Savannah (Wells) shot really well in the 1st half, but she kind of went cold in the 2nd half and then Taylor (Bennett) never really found her rhythm."

By the end of the game, the Lady Rattlers had gone from trailing Saratoga to leading them by 10 points. The final score for the Lady Panthers was 45-55.

Following the loss to LSRV, the Lady Panthers are 10-9 for the season and 5-3 in conference play. A coin-flip during half-time put Saratoga as the No. 3 seed going into the 1A West Regional Tournament.

The Saratoga Lady Panthers will begin the regional tournament facing the No. 2 1A Northwest Burlington Lady Huskies at 7 p.m. on February 27 at the Auxiliary Gym at Lander High School.