The Key to Medicine Bow 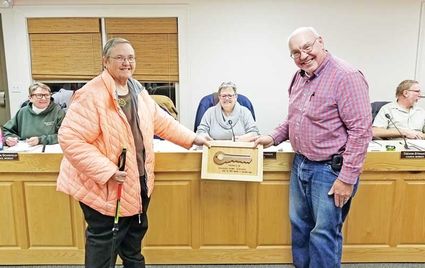 Kenda Colman, left, and husband Jim pose for a photo with the Key to the Town presented to them during the Feburary 10 Medicine Bow Town Council meeting.

Kenda and Jim Colman first came to Medicine Bow 42 years ago when Jim was hired at Medicine Bow High School. Kenda did not really know much about small town living. When she and Jim married the first place they lived was Omaha, Nebraska.

"When Jim got hired at Medicine Bow, I thought I knew what the West was like having been raised in Ft. Collins but I was totally shocked. No paved streets, no sidewalks, no nothing," Kenda said. "I really felt like we had stepped back in time."

Kenda said she and Jim were involved in the community from almost the beginning.

"We started with the fire departm...