Encampment dealt loss by Panthers during home game on Saturday 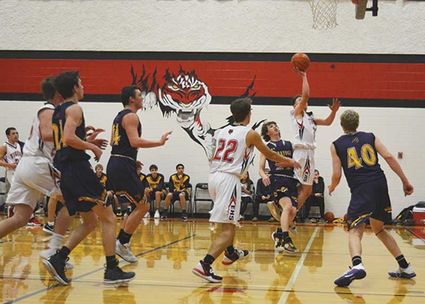 Reid Schroeder goes up for a layup against the Saratoga Panthers on Saturday afternoon.

The Encampment Tigers were riding high on an undefeated season going into Saturday as they hosted the Saratoga Panthers (14-1, 4-1) in Tiger Nation. The Tigers had defeated Saratoga with a 9 point lead in January and it had been the only loss the Panthers had leading up to the rematch.

Despite the successes that Encampment had been seeing throughout their regular season, the Tigers would ultimately be unable to escape Saratoga's claws.

"Saratoga played better than us and deserved to win," said junior Dalton Peterson.

The final score against Saratoga was 60-44.