Pulling back the curtain

Jamie Waugh uses art to show her hometown an unseen side 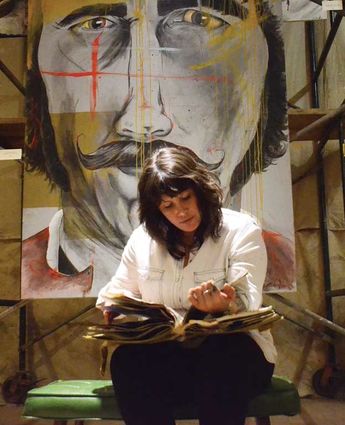 Growing up in a small town, it can be hard to break out of the image that others have cast for you. Even harder, sometimes, is choosing to be vulnerable and showing a side of yourself rarely seen by others. Yet, for local artist Jamie Waugh, that is exactly what she did on Friday afternoon.

Though located in downtown Saratoga, walking into the building at 120 E. Bridge Avenue felt like being transported into a gallery more at home in an urban setting. Once the home of Fishpaw and still a work in progress by owner Paul McCarthy, the space was perfect for Waugh's art, which is both finished and unfinished.

"If I think that it's just done and I'm done painting it, it's done. I like seeing those work in progress, unfinished lines come out from the edges of the painting. So, you can kind of see the process," said Waugh about her paintings. "I like that you can see from the beginning all the way to the finished project on one painting. Having those lines, those gestural lines, that you can see that are unfinished but also the middle is totally, perfectly painted."

While the setting may have appeared more urban, the theme of Waugh's show was much more rural. Having grown up in Saratoga, with several years in Colorado, Waugh began to realize that many of her paintings were influenced in some way by the unique personalities she grew up with. The title "Working Class Heroes: Portraits of the Modern West" is a nod to those influences.

"I realized that when we put everything together that a lot of my art is based on growing up around these types of individuals and I was just painting versions of them," Waugh said.

Along with those versions of individuals and the unfinished look is also frustration Waugh had in growing up in a small town.

"Even though this is my hometown, I never was open with, even, friends. I was a robot. I hated it. I played sports, I did what I was supposed to do. Didn't talk to very many people. Got through school. I didn't connect ever except with my parents, certain adults that were like my parents. I didn't connect with my generation," said Waugh. "So I think a lot of the turmoil in a lot of the paintings come from that because I felt like I never belonged. Except, I should feel like I belong."

Though Waugh went to scool in Saratoga for a number of years, her senior year was spent in Colorado where she had the opportunity to design her own art class. She spent her senior year painting murals throughout the school. After that, she made the decision to pursue art in college. Eventually, Waugh returned to Saratoga and began working at the Hotel Wolf.

Despite seeing many locals on a regular basis, there was still a side of herself that Waugh never showed until she began planning her show. According to Waugh, people she had known for most of her life were unaware of her paintings until she informed them about the show.

"It's nice for people that I respect and I see around town quite a bit to know my full capabilities. That I am not just someone who is working at the Hotel Wolf because I have no other options," Waugh said. "A lot of times I get that attitude, we all do as waitresses. We all have our own different things that we do."

While Waugh had done her fair share of art shows in larger cities, none of them made her as nervous as this one.

"It's honestly really like I'e let them in a little bit. It's not an insecure thing when I'm living in the city. It's normal, it's fluid. When I would do shows there it wouldn't bother me but the different demographic of southern Wyoming is what I was nervous about," Waugh said. "I think the theme of the show really helped to draw our local individuals because it kind of hits home I think."

For seven hours, Waugh opened up the doors of an unfinished building and let people she knew, and some she didn't, see a side of her they hadn't seen. At the end of the night, however, the nerves were gone.