Taking it to another level 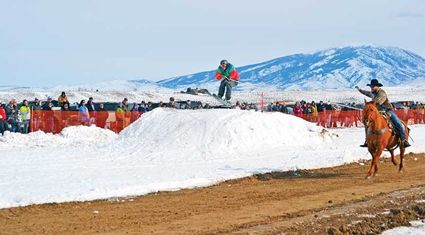 A skier and rider take to the course during last year's Saratoga Skijoring race. This weekend marks the fourth year for the races.

As Saratoga Skijoring prepares to enter its fourth year, it is already proving to be the place to be for competition. In those four years, the event competition has come a long way. In 2016, the Platte Valley Jaycees approached the Saratoga Lions Club about putting on a skijoring race. The Lions Club, looking for something to replace the cancelled chariot races, were more than willing to help.

"Initially, it was the Jaycees that had the idea and they said 'We have no idea how to put this stuff on. Would you guys partner with us?' We said, 'Absolutely, let's do it over the chariot race weeke...