Jon Nelson has been instrumental in Saratoga Skijoring's timing system 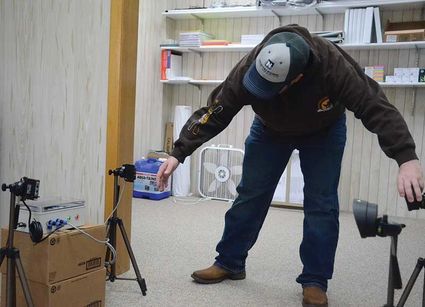 Part of the evolution of any event, especially one in which time is an essential component, is the timing system. The same goes for Saratoga Skijoring, which has gone from an analog timing system to one that removes human error.

While a timing system might normally set an organization back a few thousand dollars, the system used for Saratoga Skijoring comes courtesy of Jon Nelson of North Fork Engineering.

Nelson has been part of the timing for Saratoga Skijoring since the very first year. For those first races, three timers were placed at the finish line and they would start their stopwatch based on the movements of the flagger at the starting gate.

"The first year, all I had was a spreadsheet where you would just manually enter those three times from the stopwatches. So, the race would be over and I would say, 'Okay. Times' and somebody would say '32.21. 32.23. 32.41.' The 32.41 gets thrown out. Obviously they were late on the finish or they were early on the start," said Nelson. "We felt like that was fair and consistent, but obviously prone to human error. Human error on behalf of the flagger, human error on behalf of the timers, human error on my behalf entering it into the spreadsheet. Three places you could get it wrong."

When discussion began about improving the timing system, Nelson briefly considered the purchase of timing systems used for downhill ski races. With a price tag of approximately $8,000, however, the engineer began to look for other alternatives.

The skier breaks the beam of the first sensor when the race starts. At the finish line, the beam of the second sensor is broken. Those analog signals are converted into a digital input through a USB switch convertor and the data is entered into a Google Spreadsheet. A formula in the spreadsheet gives the data a timestamp while another formula subtracts the values of the start input and the finish input to generate the time.

Last year was the first year this timing system was used and the starting sensors were welded onto gates. This year, the timing system is much more portable as both the starting and finishing sensors are placed on tripods that will collapse should they be hit by a skier to prevent injury. In addition to the main timing system, Nelson has also created a backup system that can be transported to other races. 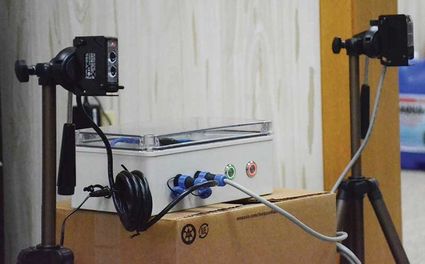 The timing system is set-up at North Fork Engineering for a quick test.

"He's our own mad scientist. I've been to races where the timing is a pain and it's never out on time and, with Jon, you never have to worry because he's smarter than everyone else and he can augment that," said Will Faust.