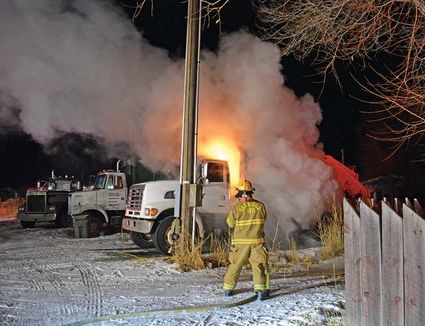 Fire flares up as the SVFD works to put it out.

Evergreen Disposal was briefly handicapped over the weekend following a fire in one of their garbage trucks, but the Encampment-based trash hauler is showing that they won't be kept down for long.

At approximately 5:45 p.m. on January 16, the Saratoga Volunteer Fire Department (SVFD) was called to respond to reports of a fire at 210 N. State Street in Saratoga. A fire in one of the garbage trucks was observed upon arrival and the fire was eventually extinguished.

The garbage truck was one of three owned by Evergreen Disposal and, at the time, was the only one that was operational. The other...