Encampment girls fall to Saratoga in the Panther Den 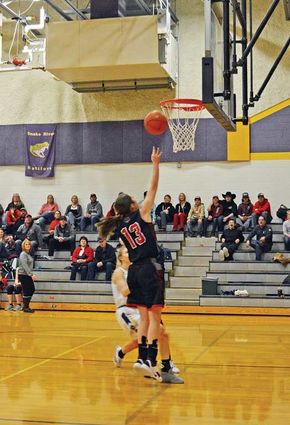 Photos by Amanda Shepherd Peyton Munroe goes in for a layup during Thursday's game in Saratoga.

The Encampment Lady Tigers got their first taste of conference play last week as they were hosted by the Saratoga Lady Panthers on January 9. Despite keeping close with Saratoga for most of the game, the Lady Tigers would eventually fall by 9 points in the final minutes of the game.

"I thought this was a good game for us, but we didn't get enough players involved in the offense to get a win," said Clint Bromley, head coach of the Lady Tigers. "It was exciting to watch and was a 2-point game with two and a half minutes to go and then Saratoga went on a run to finish the game."

Throughout most of the game, the young Lady Tigers kept the gap between themselves and Saratoga small. Encampment would trail, at most, 6 points. In the final quarter, it looked as if perhaps the Lady Tigers would put a conference win under their belt early in the season.

Saratoga, however, was determined not to let that happen. As the clock ran down in the 4th quarter, the Lady Panthers pushed ahead of Encampment to deal them a loss. The final score was 41-50.

"Our hats are off to Saratoga for collecting 19 offensive rebounds and that proved to be the difference in the game," Bromley said.

Following the loss to the Saratoga Lady Panthers, the Lady Tigers are now 5-5 for the season and 0-1 in conference play. With homecoming this week, the Encampment Lady Tigers will be hosting the Little Snake River Valley (LSRV) Lady Rattlers (5-6, 0-0) at 1:30 p.m. on Saturday.