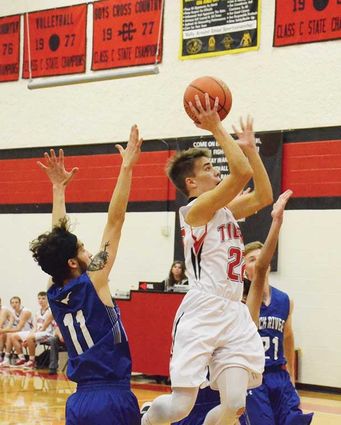 Photos by Joshua Wood Tiger Dayne Anderson moves through three Rock River players for a layup during Friday's game against the Longhorns.

Over the weekend, the Encampment Tigers showed that they didn't waste any time during their holiday break. Hosting two non-conference games, the Tigers hit the hardwood running as they ended both games with running clocks. On Friday afternoon, the Tigers hosted the Rock River Longhorns and wasted no time in putting points on the board. Saturday afternoon saw similar gameplay as Encampment hosted the North Park Wildcats.

With the significant lead that the Tigers saw over both teams, Head Coach Jake Johnston was able to play his first-string substitutes. Along with getting them some experienc...