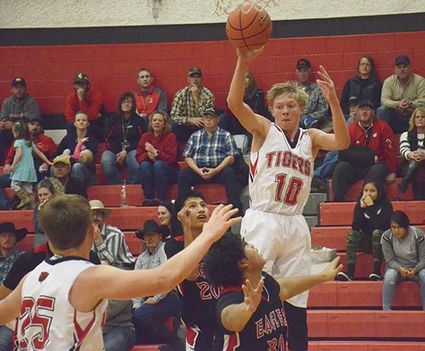 Casyen Barkhurst (10) passes the ball to Koye Gilbert during the Saturday game against St. Stephens.

While they were technically preseason games, the Encampment Tigers appear to be off to a good start as they hosted the Carbon County Classic and won all four games over the weekend. Following a 20-point lead over the Dubois Rams for their first game, the Tigers saw a repeat from last season as they had two running clocks against the Meeteetse Longhorns and the Hayden Tigers. In their final game, against the St. Stephens Eagles, Encampment would go into overtime to secure a win.

In addition to the four wins, the weekend saw junior Dalton Peterson complete a dunk against the Longhorns. The ru...