Lady Panthers make it to championship round in first time since 1991, face defending State Champions 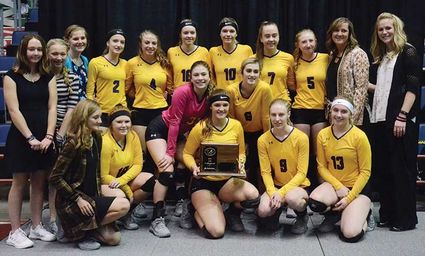 The Saratoga Lady Panthers pose with their 2nd Place trophy at the Casper Events Center on Saturday evening following the Championship Round.

The Saratoga Lady Panthers capped off their nearly undefeated season by placing as runner-ups at the 1A State Championship over the weekend in Casper. Last season, the Lady Panthers had made it to state for the first time in 13 years and advanced to the semi-final rounds for the first time since 1991. Saratoga ended their 2018 season placing 4th in the 1A conference.

This season, the Lady Panthers were able to dispatch nearly every team they went up against on the court. The only exceptions were the 3A ranked Mountain View Lady Buffaloes and the defending state champions, the Cokeville Lady...