Lingle-Ft. Laramie Doggers doggedly come at the HEM Miners but cannot defeat the hosting team in the playoff game to reach the finals of the State Championship 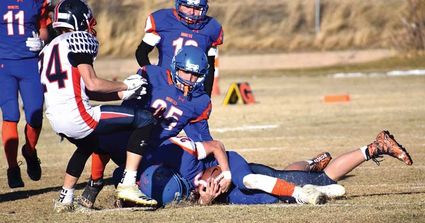 Conor McGraw recovers the football that led to a touchdown a few plays later.

The Hanna, Elk Mountain, Medicine Bow (HEM) High School football team hosted the Lingle-Ft. Laramie football team at 1 p.m. on Friday for the right to go to the State Championship next week in Laramie.

The Doggers had faced HEM before, on Sept. 28, when the Miners came out on top 69-24. The team that played back in September was much more physical this time around.

"The Doggers are a great team and have some great kids," HEM Head Football coach Zach Scott said. "They were tough and we had to earn the win today and we did."

The Miners scored first, but it was a...