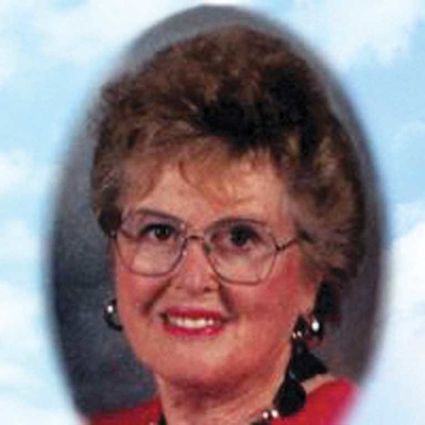 Alice Claire Sholine passed away peacefully on Nov. 2, 2019 at the Sheridan Memorial Hospital.

Alvo, Neb. was her birth place. Parents John and Marguerite (Dye) Foreman welcomed her into the world on July 17, 1925 to join siblings Willard and Cornelia. The family later moved to La Jara, Colo. and then permanently to Fort Collins, Colo.. Alice graduated from Ft Collins High School and attended Colorado State University.

In Dec. 1945, Alice met the "love of her life" Ed Sholine on the CSU campus. She said it was "Love at first sight". That must be true as they were married in May 1946 and were together 56 years until Ed's death in 2002. This love adventure took Alice from the bustling city life to the isolated family ranch in Glendevey, Colo. This new lifestyle must have been a huge adjustment. This bride learned to cook and bake–not to mention on a wood stove–and often for many hay hands and hunters and spent winters snowed in for months on end with no outside communication: except the mailman who snowshoed into the ranch once a week! Alice was the postmistress for many years in Glendevey.

Cyndee, Sallie and Jeff were all born while living at the Sholine ranch. In 1959 the Sholines moved to Saratoga, Wyo. They resided at Cedar Creek Ranch until retirement. One of Alice's fondest memories of Saratoga was her position as the Secretary to the Principal at Platte Valley High School for many years. Not only was she the secretary, but helped with counseling needs. She loved working with the students and has reunited with many of them over the years since.

Retirement brought the Sholines to Sheridan in 1987. Alice loved living near grandkids, shopping and the YMCA. She was an active member at the Y for 32 years. She loved singing with the Sheridan Aires, gardening her flowers and reading. She was a devoted member of the Wesleyan Church and loved all the church activities. Alice was also a member of the Social Order of Beauceant. In 2018, Alice moved to Westview. Her need for closer medical attention was necessary at the age of 92. Alice was preceded in death by her parents, brother, sister, her husband Ed, and son Jeff.

Alice will be remembered as a real character or, some say, "a Hoot". She always had a positive attitude, was a prankster, witty and spoke her mind. She was a wonderful wife, mother and grandmother. Always a Christian and devoted to the Lord.

A Celebration of Life was held on Tues., Nov. 12, 2019, at Kane Funeral Home with Gary Kopsa officiating.

Online condolences may be written at www.kanefuneral.com.

Kane Funeral Home has been entrusted with local arrangements.