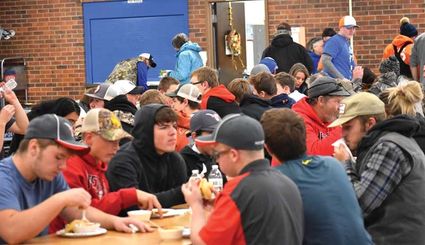 Meeteetse football players and fans mixed with the HEM team members and fans at a good sportsmanship lunch sponsored by several local businesses and hosted by the Priest family and HEM volunteers.

They decided, after the playoff football game against Meeteetse, HEM would host a lunch for both teams, no matter who won, in a show of good sportsmanship .

Besides Priest and his wife, his children helped serve both teams and fans. There were over 100 people that attended the lunch.