HEM netters come out of 1A East Regionals as No. 3 seed 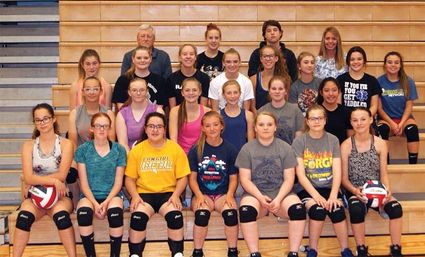 The Hanna, Elk Mountain, Medicine Bow (HEM) High School girls volleyball team went to the 1A East tournament on Friday in Wheatland. Once it was over, they found themselves going to the State Championship.

Their first game on Friday morning was against Arvada-Clearmont and the Lady Miners took care of business winning all three games (25-17, 25-12, 25-17).

The next team the Lady Miners were to meet were the No. 2 seed from the Northeast Conference, the Upton Lady Bobcats.

Early Saturday morning the Lady Miners had to face conference rivals Rock River. Jones said she always respects a Heather Alexander coached team and could never be counted out to win. The Lady Longhorns came in to upset the Lady Miners. The battle was on.

Jones was happy with her team's effort.

"We are proud of our finish and the fact that we qualified for state for the third consecutive year," Jones commented. "Out of 21 1A teams in the state of Wyoming, we are one of the eight playing in Casper this week."

The Lady Miners will be facing the Lady Saratoga Panthers in their first match at 4:30 p.m. on Nov. 7.

Jones said the team is ready for state.

"Our girls are dedicated to each other and Lady Miner volleyball," Jones said. "Each and every win or loss is about team, and this week will be no different."