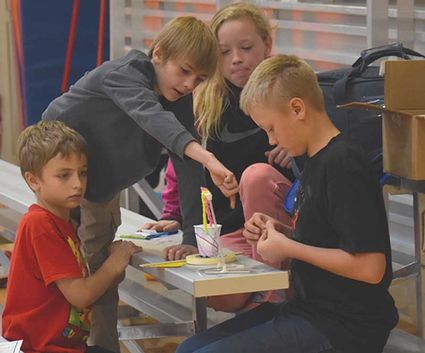 It was a group effort that had kids from different classes work together.

On Friday morning, the students at Hanna Elementary School (HES) started their day creating different projects in a manner that had them learn to estimate cost and the value of cooperation.

"Here is a marble run and over there is a tower," Sara Jones, fourth grade teacher and coordinator for this educational program said. "This time instead of giving them a bucket of supplies, like we normally do, they get their project they have to make, then they have to plan out their project first using a list of materials. They are given ten dollars, so they have to budget and then buy the supplies they think they need. If they go over budget, that is tough luck and if they have any money left over, then they can make improvements."

Jones said any items the group doesn't use, they can return to the store.

The store is run by teachers of HES, as is the bank. The children get their money from the bank first and then go to the store that is truly next door for their materials for purchase.

The students were broken down by counting off by four. The idea was to have a mix of ages for all the different groups, but have it random. Jones said it worked out well with the exception of one. There were four older boys clustered together.

"It is going to be interesting on how they do," Jones said smiling.

She said there were six different projects, several of them a mystery, but because there were 16 different groups, there was doubling up on what the students did. She said materials were not always abundant, so the group that didn't get to the store in time had to improvise. 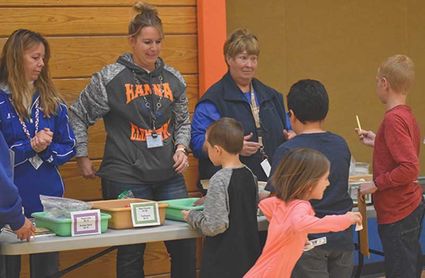 The store and bank are ready for business at Hanna Elementary.

"There were mystery projects that the group didn't know what they were actually making," Jones said. "They had to fill out their cost sheet before going to the store, so with a mystery project, there had to be some thought into why they needed the materials and exactly for what."

Jones said the "Mystery Project" was themed partly to go with October and Halloween. The mystery projects entailed math with budgets and imagination for the kids to figure out what the end project was to be.

She said there were free materials such as tape, scissors and pens.

"They really have to grasp what they are doing," Jones said. "It is all done by the students. The teachers aren't allowed to help with any of the building or constructing. They are there only to answer questions,"

She said it is all on the students.

"It makes them learn in many ways," Jones said "They also help each other, so it is win/win."