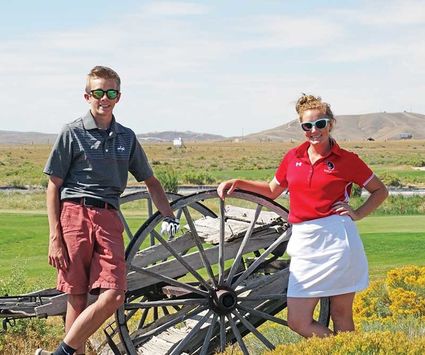 High school golfers Logan Wells, left, and Kaylyn Hunter pose for a photo. Wells played golf for the first time this year and Hunter has been the only girl on the Outlaw golf team for the last three years. Hunter earned a 3A Girls All-State ranking in Afton this year.

Fall golf saw two Saratoga students wrapping up their senior season by temporarily trading their purple and gold Panther attire to dawn red and white for the Rawlins Outlaws.

Logan Wells joined the team for the first time this year. He was able to attend two meets; scoring a 117 and 108 at the 3rd Annual Terry Berg Invite in Lander and 126 and 118 at the Rawlins Invite.

Kaylyn Hunter has spent the last three years being the only female golfer for Rawlins. This year she saw great success placing in the top 10 at two of the three regular season meets; scoring a 99 and 106 at the Douglas Invite; 109 and 106 at the 3rd Annual Terry Berg Invite in Lander; and a 106 and 103 at the Rawlins Invite. At the 3A conference tournament in Torrington, she placed in the top 10 and earned All-conference honors with scores of 114 and 116. Kaylyn's season finale was placing in the top 10 and earning 3A Girls All-State ranking in Afton, with scores of 101 and 94.