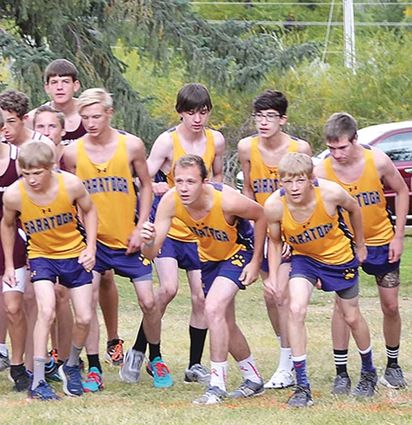 Saratoga's boys are crouched and ready at the starting line.

Saratoga Middle/High School hosted the Shana Ward Memorial Invitational this weekend and, while the Bartlett twins didn't secure the top two spots as they have in the past, the runners they fell to were from two 3A schools.

Girls varsity had 31 runners compete at the Saratoga Hot Springs Resort golf course. Out of those, Encampment's Amber Stubbs placed 21st after finishing with a time of 24:03 and Saratoga's Kaitlyn Campbell finished with a time of 24:56 and placed 24th.

Out of 38 runners in the boys varsity, Grant Bartlett finished with a time of 17:24 and came in 2nd place to Travis Harm...