Saratoga Lady Panthers take down Farson-Eden, go point-for-point with Cokeville for a 1-1 weekend 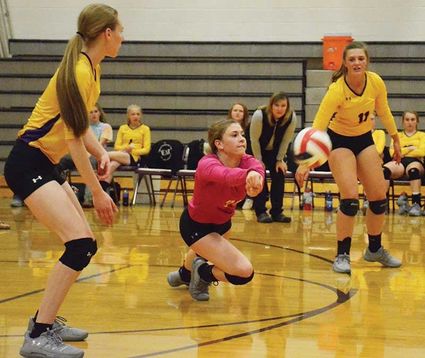 Tasia Daley moves to return the ball on Saturday.

In the competitive realm that is the 1A Southwest Conference, the Saratoga Lady Panthers were riding high on a six win streak following a victory over the Farson-Eden Lady Pronghorns (25-3, 25-11, 25-10) on Friday evening. On Saturday afternoon, however, the Cokeville Lady Panthers secured their second win in the Valley (19-25, 14-25, 20-25) and dropped Saratoga to the No. 2 spot.

As Saratoga kept the heat on the visiting Lady Panthers, however, it would appear that a matchup of both Lady Panther teams will be the one to watch as the season progresses.

Farson-Eden entered the Panther Den following one victory on Friday, but wouldn't leave the Valley with two. The Lady Pronghorns were unable to score high against Saratoga and were unable to take a set from the hosting Lady Panthers.

"This last week we just really focused on defense and transition and really moving more as a unit," said Shayley Love, head coach of the Lady Panthers. "We were just really moving our feet. Farson did not have a good game, I can say that, too. I felt like they walked into the gym defeated. I just felt like when they came into the gym, they were a little bit off and our girls were ready to play and it showed."

During the first set, Saratoga kept the Lady Pronghorns to single digit scores while surging ahead by 22 points. The following two sets appeared to be more of the same as Farson-Eden only scored a maximum of 11 points in the second set and 10 points in the third set.

T. Bennett was also the lead blocker for the Lady Panthers, with 7 solo blocks. W. Bennett, Savannah Wells and Dew each had one solo block for a team total of 10 solo blocks.

Following a successful victory against the Lady Pronghorns, Saratoga opened the Panther Den, again, as they hosted Cokeville. The back-to-back defending State Champions were put to the test by the hosting Lady Panthers. Ultimately, the visiting Lady Panthers would secure a win in three sets.

"To be able to come back from a game last night, where the style of volleyball is just slightly different, and having to turn around and play today where you're going to have a quicker game, a very competitive game, sometimes that can be tough," Love said. "So, with our girls we just talked a lot on 'You can't let up on the little things. You've got to know where the ball is at all times and take care of that.' We talked a lot on that." 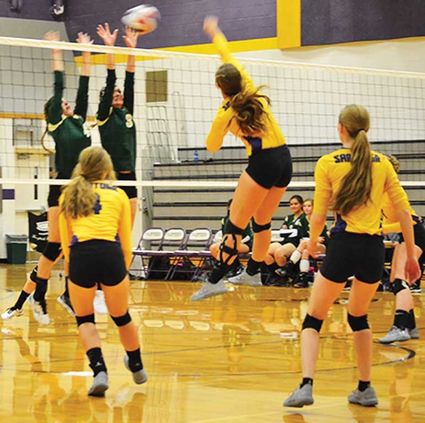 Aubrey Berger gets past a Farson-Eden block on Friday.

Daley dug out 17 attempted scores by the visiting Lady Panthers and was followed by Berger with 14 and W. Bennett with 10.

"We did some really great things. We matched them point-for-point ... it was just keeping the momentum once we got it," said Love. "As far as competing with them and staying competitive the whole match, I was proud of them for that. I told them, 'I hope we see them three more times this year.' If that's the case, I think each game's only going to make us better each time."

Following this weekend's games, Saratoga's Lady Panthers are 10-2 for the season and 3-1 for conference.

The two games this week for Saratoga will be on the road. The Lady Panthers will have been hosted by the Hanna, Elk Mountain and Medicine Bow (HEM) Lady Miners on Oct. 1 and will travel to Rock River to take on the Lady Longhorns at 1 p.m. on Oct. 5.