HEM Volleyball host Glendo for win on Tuesday, falls to Saratoga on Friday 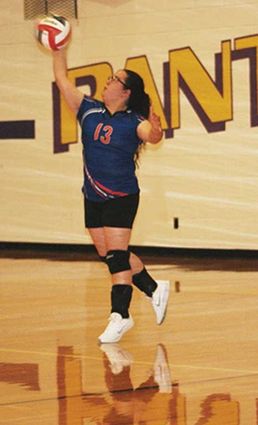 Hanna Gonzales gets ready to serve the ball against Saratoga.

On Sept. 17 at Hanna, Elk Mountain High, Medicine Bow (HEM) High School the girls volleyball team dominated Glendo in all three games. After the first game, head coach Jackie started putting in players that did not play a lot of time.

The first game went entirely the Lady Miners way. Glendo found itself down by 9 pointsto zip before they scored their first point. The Lady Eagles scored three points against the Lady Miners and the score was 11-4.

The Lady Miners roared back and before the Lady Eagles knew what hit them, HEM had won 25-6.

The co-captains Taylar Scott, Amy Campbell and Madison Campbell had good communication on the floor as they de-feathered the Lady Eagles.

The second game had head volleyball coach Jackie Jones start sending in players that were not used to playing much. The players that went in did a great job and before the Eagles knew it, the score 9-4. It didn't get better for Glendo, although the team did get closer than the first game. The second game finished with the Lady Miners winning 25-13.

In the next game, the Lady Eagles scored first. Three unanswered points had Glendo ahead by their largest lead since coming into the HEM gym. The score was 0-4.

The Lady Miners quickly got two points, but Glendo scored again. That would be the last time the Lady Eagles would be ahead.

Haley Felton, serving three more unanswered points, had the Lady Miners ahead 7-5. From then on the Lady Miners never looked back. Glendo did have some rally moments, but, in the end, the score was 25-15.

"I was thrilled with Rainey Wilson in the front row," Head Volleyball Coach Jackie Jones said. Wilson is usually the libero for the team. "It just goes to show what a versatile athlete she is."

She said when the varsity girls were out, they still shouted encouragement to the 2nd team.

"When the last game had Glendo going ahead, I know there were some who thought I should put back the varsity players, but I knew sticking it out with the players out there, we would come out okay," Jones said.

She had praise for freshman Becca Million.

"Becca has been doing so well in practice that she earned the playing time she got," Jones said. "She was the first sub in and it is because she works so hard in practice. I am thrilled with her performance tonight."

She said the co-captain core of Amy Campbell, Madison Campbell and Taylar Scott did well.

"Our next game against Saratoga will be a different beast than this one," Jones said. "Win or lose, they are a team that makes us better."

The Panthers Roar Back

Jones had to be happy when the Lady Miners scored the first point in their first game against Saratoga on Friday. Moments later it was 4-0. The Lady Panthers rallied with three unanswered points and it looked like Saratoga was on the prowl to take over the game, but Million scored to stop the run and in a moment the Lady Miners were ahead 6-4. The Lady Panthers never were out of the game, but they could not pull ahead of the Lady Miners. There was usually five points separating the teams. The final score was 25-19.

"Our first game went our way, but that is where you have to give credit to Saratoga that they didn't buckle and came roaring back in the last minutes of the second game," Jones observed.

The fourth game had Lady Miners take the lead 2-1. HEM was up 6-3, but Saratoga fought back and the score was tied 8-8. HEM got the lead back and lost it a minute later and Saratoga found its team ahead 9-11. HEM tied it up and then took the lead 13-12. It didn't last and the score was soon 14-14. HEM took the lead at 18-17 but minutes later the game was tied again at 19-19. When the score went to 19-21 for Saratoga, Jones called a time out. It almost worked. The score was 21-23 in Saratoga's favor before the Lady Panthers scored the next points winning the game 21-25.

"I thought it was great volleyball," Jones said. "I think what I became disappointed in was our girls chose to start tipping and we sent them way too many free balls and when we did they took advantage of it."

She said the Saratoga team took care of business in the later sets by hitting the volleyball very well. 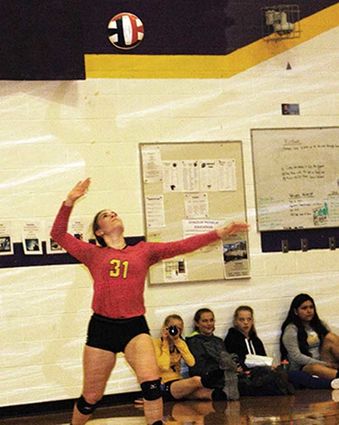 Saratoga Libero Tasia Daly eyes the ball in the game against HEM.

"When you have a team that has heavy hitters like Saratoga, you can't give them free balls, just to run what they want offensively," Jones observed. "I felt like the last games we did that too many times. My hats off to them."

Jones said playing Saratoga was great for her team.

"I think these are the games that build a team," Jones said. "Heck yes, we wanted to win the game, but you are going to lose some. Then you go to practice on Monday and learn from what you did wrong."

She said the team is looking forward to having the weekend off .

"It was a great night of volleyball, but we have been playing sometimes three times a week and these are little humans that need rest, so I am glad to give them a few days off," Jones said. "We knew it was going to be a tough game, but now we have to look forward to Rock River."