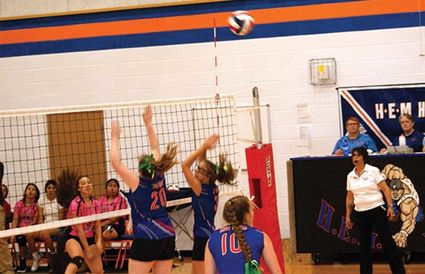 The Lady Miners faced a tough opponent against the Wyoming Indians, but prevailed winning all games.

The Hanna, Elk Mountain, Medicine Bow (HEM) High School girls volleyball team gave their fans something to cheer about twice during homecoming week. They won their non-conference and their conference matches on Thursday and Friday respectively.

The Wyoming Indian team looked to spoil the Lady Miners first set as they went ahead on several occasions. HEM pulled together towards the end and won the set 25-21. The next match was even closer as the Lady Miners held off the Lady Chiefs to win 25-23.

"We play down to the other team's level when we first start and sometimes that gets us starting slow," Co-captain Taylar Scott said.

There Are Three Co-Captains for the Lady Miners

"When we talk out on the floor we are a better team," Madison Campbell, another co-captain explained. "When we get into a system, this gets us fired up and we are a better team. When we start losing, we try and settle down and then show what we can do."

Amy Campbell, co-captain, said there is adjustment having new players come into the system.

"We are teaching the new players how to work as a team," Amy said. "We work in definite system."

The Lady Miners system paid off as they beat the Wyoming Indians 25-21 in the last set.

"Everyone who is on the team has to step up and do their part," Scott said. "We have to work together as a team."

"They give you lots of different looks," Jones said. "It might be a hit from the outside, it might be a tip from the middle and they are a 2A team. We have to be ready for anything with a team like that. They did a really good job and we had our work cut out for us, but in the end we took care of business."

Jones said usually she calls her team, the "late bloomers" because they often get down and come back in the end to win the game. Against the Lady Vikings, HEM would get ahead by several points in the beginning, only to have their opponents start to threaten. Each time, the Lady Miners would take control and win the game handily.

Jones was happy with her core players, but she was pleased with several other team members.

"Last night I felt Hannah Christie really grew and today she was excellent again," Jones said. "We had our lulls, but I have to say that group of boys really motivated these girls when the lulls happened."

Jones is referring to the HEM football team players that were in the stands yelling cheers and waving flags of support.

"You could feel the school spirit out there and it made a difference," Jones said. "I think we still would have taken care of business, but the boys really helped us stay in the game better."

She said Amy Campbell had another big game as the player went to the net often and got kill shots.

Another player Jones cited was Rainey Wilson. "Rainey had a tough first game, but she is the kind of girl that makes mistakes, then gets up and concentrates on 'that next ball mentality' and she really is a go getter," Jones said. "Plus she does it with a smile on her face. It is no mystery why the past two matches she has won sportsmanship award."

The next scheduled game is at 4:30 p.m. on Tuesday at HEM against Glendo.