Blooms at the lake 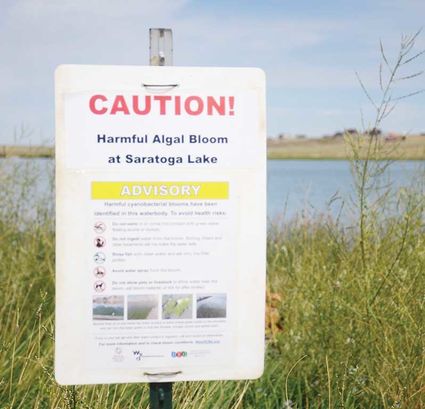 A sign at the Saratoga Lake warns recreational users of the dangers of a Hazardous Cyanobacterial Bloom.

On the afternoon of Aug. 28, the Wyoming Department of Environmental Quality (DEQ) issued a recreational warning for four lakes in southern Wyoming, including Saratoga Lake, due to hazardous cyanobacterial (blue-green algae) blooms (HCB) or harmful algal blooms.

According to the Wyoming DEQ, the Wyoming Game and Fish Department (WGFD) reported a potential harmful algal bloom in Saratoga Lake on Aug. 26. Wyoming DEQ visited the reservoir on Aug. 28 and collected water samples along the west shoreline near the southern part of the campground. The results of 20,000 cells per milliliter led to...