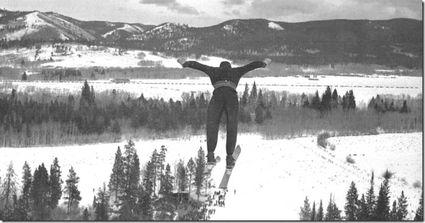 Courtesy of Historical Reproductions by Perue from Martin/Perue Collection.

This photo from the Bob Martin/Dick Perue collection shows a ski jumper off Barrett Ridge, which was supposed to be the subject of two separate programs.

Two programs by local historian Dick Perue, one sponsored by the Saratoga Friends of the Library and another sponsored by the Saratoga Museum, have been cancelled. The Friends of the Library program, which was scheduled for Aug. 15, was intended to relate the history of the Barrett Ridge ski jump and Ryan Park Ski Club and would lead into the museum trek, which had been scheduled for Aug. 31.

Due to what Perue described as considerable interest in the two events, the local historian related a portion of the history in a press release to the Saratoga Sun. Perue also hopes to write about more...