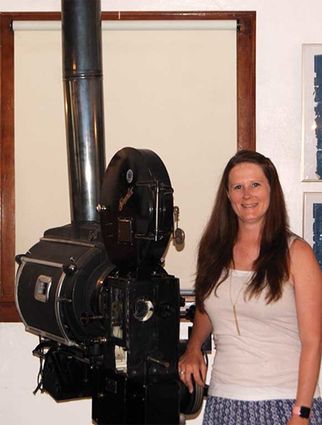 Hanna Basin Museum has a new director in Sunshine Solaas as she smiles next to an old movie projector.

Sunshine Solaas is settling into her job as the new director for the Hanna Basin Museum (HBM). The position had not been filled for several months and Solaas acknowledges there is work to be done.

Solaas is originally for Grand Island, Neb. She did live in Florida for a year after graduating before returning to the state she was raised, but lived in a much smaller town.

"Broken Bow is about 4,000 people, bigger than Hanna, but still a small town," Solaas said.

She lived there for 10 years before her husband was brought to Carbon County to work on the wind farms outside of Hanna.