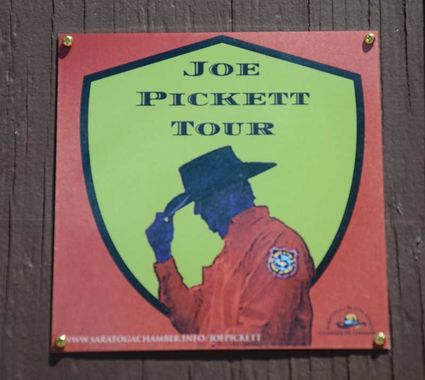 A sign at an undisclosed location marks a stop on one of three routes for the Joe Pickett tour.

It is not uncommon for fans of popular book series to want to journey to the locations that inspired their favorite authors. Chuck "C.J." Box, New York Times Bestselling author of the Joe Pickett series, has made no secret about the state and the communities that have inspired his writings. The fictional town of Saddlestring, Wyo. is an amalgamation of different Wyoming towns, including Saratoga. When Box announced in February 2018 that his 18th book, "The Disappeared", would take place in the Valley, the community was ecstatic.

Stacy Crimmins, the Executive Director of the Saratoga/Platte Valley Chamber of Commerce, saw an opportunity with the release of "The Disappeared."

"The whole Valley's always been a big fan just because we knew that a lot of the places he wrote about were inspired by Saratoga and surrounding areas, but this book was different in that it actually takes place in the town of Saratoga instead of a fictional town and many real locations are named with their real names," said Crimmins.

Crimmins wanted to take advantage of the interest in the Valley that the book would bring, but didn't want to go with a format like that of Buffalo, Wyo. and Longmire Days, a multi-day event.

"We did not want to do a large event because that was time consuming, it only got people here for one weekend, we wanted something that was more year round and something that, once you got it set up, it could just run itself," Crimmins said.

According to Crimmins, Laurie Box, Chuck's wife, is an avid quilter and many quilt shops do a walking tour in which participants go to several locations. Once they are finished, they receive a prize.

"The basic premise is that it's a self-guided tour. You go to each of the locations, you might have to do a little investigative work, find them on a map, because we're not providing anything beyond just the name," said Crimmins. "We've got plenty of great publications and companies and organizations that print those maps and stuff, so we didn't want to recreate that part of it."

The Joe Pickett Tour is composed of three different routes, each named after one of Joe Pickett's daughters; Sheridan, Lucy and April. Each tour is different from the others and a mixture of easy to difficult and include local businesses mentioned in either "The Disappeared" or used as inspiration in other Pickett books and wilderness areas and outdoor areas as well.

"For instance, the Brush Creek Visitor's Center is the inspiration for Joe's house. So, it's Brush Creek Ranger Station and that was his inspiration for the Pickett home. Then, you had something like, in "The Disappeared" they actually talk about the Saratoga lumber mill or having something to eat at Saratoga Hot Springs Resort. So, it's a little bit of combination of several fictional and non-fictional places," Crimmins said.

The timing could not have been better on Crimmins' part.

"As it turns out, it was a really fortuitous timing because, just a couple of weeks before Stacy approached us with the idea, I was talking with the showrunners of the Joe Pickett tv show that's in development, still," said Box. "I had offered to them that I didn't know how familiar they were with Wyoming, at all, hoping that they would at least consider filming here. I went down through the books, prior, and made a list of all the locations I had in mind when I wrote them, so that if they came out I could take them there."

While one aspect of the walking tour is to provide fans of the Joe Pickett series a way to experience the inspirations for the books, another is to help local businesses get people through the door. According to Crimmins, stops on the tour that have asterisks by the name have agreed to offer special discounts for people taking the tour.

"We wanted, as an additional incentive, that a private business could offer a discount or a promotion or something like that. So, there would be an asterisk after the name on the checklist. For instance, the chamber's on the checklist and there's asterisks after our name and if somebody were to stop in here and say 'I'm on the Joe Pickett tour' then they would get a free sticker," said Crimmins.

A major incentive for fans of the Joe Pickett series to come to the Valley and take the tour is the possibility of having a character named after them.

"We have a competition that we will hold once a year. The deadline to enter is September 1 and you enter by uploading a selfie of you, or somebody take a picture of you, and the small metal sign with the logo on it so you can prove that were you at one of the stops," Crimmins said. "The winner will be randomly selected and they will be a character in the next Joe Pickett series book. For dedicated fans, that's kind of exciting because you have a chance to be in a book."

Box, along with providing some information to Crimmins and the Chamber of Commerce, is excited about the tour and the ability for fans to walk in the footsteps of their favorite Wyoming Game and Fish Game Warden.

"I know there are people who come to town because of the books. We were having dinner ... at Bella's and there was a group of six people, three couples, one of them was staying in the Joe Pickett Room at the Wolf and the other two had tagged along just to see the location because of "The Disappeared." So, I know they're out there and I meet them, I run into them, I hear about them having dinner around town," said Box. "So, this is kind of a way for them, when they're here, to focus a little better. They can just wander around or they can really see the whole Valley from start to finish."

For more information on the Joe Pickett tour, or to purchase the pamphlets, visit www.saratogachamber.info/joepickett.