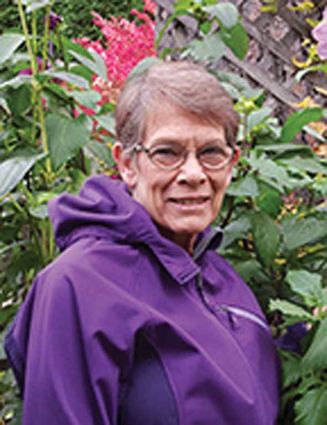 In March 1940 Samuel and Viola McClung traveled to Omaha, NE to adopt a 3-month-old baby girl. They named her Evelyn Viola. They took her to live with her adopted brother, Harold. Their farm was near Big Springs, Nebraska. In the summer of 1956, she met Donald Burge. They were married July 5, 1959. They lived in Laramie, Sterling, Colo., Saratoga, and Walla Walla, Wash. before settling in Spokane, Wash. in July of 1969 with their 1-year-old son, Christopher. While here, she was blessed with two daughters, Christina and Suzannah. She worked as a volunteer and was later employed by the Community Mental Health Center as a counselor. Zeke was known by many as a good listener. She was an avid flower gardener, especially dahlias. She is survived by her brother Harold and sister-in-law Jeanette McClung of Big Springs, Neb.; her husband Donald, son Christopher, daughter-in-law Christine, and three grandchildren Duncan (15), Angus (11) and Bronwyn (4) of Spokane, Wash.; her daughter Christina, son-in-law Jim Knapp and two grandchildren Nalin (19) and Liadan (15) of Page, Ariz.; her daughter Suzannah and son-in-law Jeff Lindberg of Boise, Idaho. In lieu of flowers, the family suggests a donation to Hospice of Spokane or to the Spokane Food Bank. A celebration of life is planned for a later date.