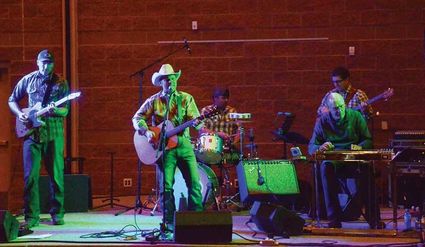 Jared Rogerson, center, plays with his band on June 8.

From the Wyoming town of Pinedale to Germany, Jared Rogerson has played his eccentric style of music to many different audiences. Rogerson, who played at the Platte Valley Community Center on June 8, is no stranger to the Valley. Along with playing at the Grand Encampment Cowboy Gathering in 2018, he also played Freedom Fest at The Yard a few years ago along with the Tika Brock Band and Chancey Williams and the Younger Brothers Band.

Using the term "eccentric" is about the best way to describe what Rogerson plays, which he calls "Contemporary-Cowboy-Rock Flavored-Traditional Country and Wes...