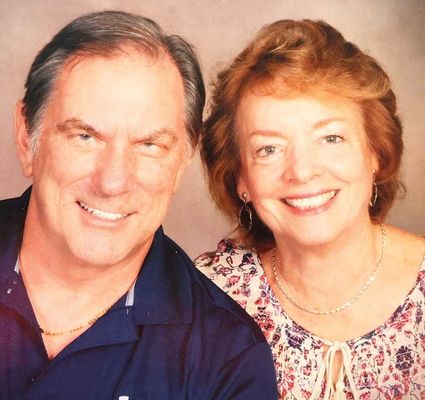 Joan Fountain, right, poses with her husband, Walter. Fountain will be at the GEM on June 20 to sign books and hold a writing presentation.

Following the end of the Civil War in 1865, countless Americans headed west. Former slaves, Confederate soldiers, immigrants and more headed to the West to start a new life. What would eventually become the Wyoming Territory in 1868 was one such place and serves as the backdrop for Joan Cullins Fountain's book series "No Shadow of Turning."

"Many people just went west. It was immigrants, murderers and convicts, and people that just wanted a new start. My great-great-grandfather always had in his mind that he would like to take his family west because there was freedom there," said Fountain.

Fountain has never lived in Wyoming. While she currently lives in Maryland, both sides of her family come from Virginia, dating back to the 1600s. With such an extensive family history, the author developed an interest in the Civil War and sought to learn as much as she could. Additionally, her fascination with Wyoming has been credited to classic western shows and her love of horses and cowboys.

"A lot of the programs at the time were western programs and I always, I don't know why, connected it with Wyoming. I've just always loved Wyoming," Fountain said. As a young adult, I got to go out to Wyoming and explore a bit and then, in the last eight years, I've been going back and exploring, especially the Snowy Range. I've been all over the state, but I just found it very interesting."

Fountain wanted to find a way to connect Wyoming and Virginia along with using all the information she had learned about the Civil War and her own family history.

"Just using the culmination of all my experiences; all the things that I learned from my history in Virginia, the whole Civil War and then visiting the Shenandoah Valley of Virginia, I realized there was a way to connect the states (with) the storyline of the Civil War because, after the Civil War, many people went west because of different reasons," said Fountain.

Enter Johnny McLane, the protagonist of Fountain's series. While the series itself is set in the Wyoming Territory, it flashes back to his childhood in Virginia leading up to the Civil War and his time as a cadet in the Virginia Military Institute.

"It's kind of a wide-ranging epic kind of story and it just is a culmination of all the things I've learned to love," Fountain said. "It is a story about a person's personal development as they move along from a child to a young adult and then to adulthood and figure out what they want to be and how they can become what they want to be. A lot of times, things change and you're not able to meet your first dream, but then, as time goes by, you begin to see other talents and other things that you're interested in as you take advantage of all the experiences and it helps set up what you end up being in your life and what you end up doing."

Fountain will be returning to Wyoming this week, as she visits the Grand Encampment Museum (GEM). The Maryland-based author has been to the Valley before and had done research at the GEM about two years ago under former director Christy Smith. When she contacted the GEM, this time about doing a book signing event, it was Director Tim Nicklas who answered and informed her that the museum would be happy to host her.

Beginning at 5:30 p.m. on Thursday at the GEM, the Sierra Madre Strings Trio will be performing on the Caboose Stage across from the Doc Culleton Memorial Building. Then, at 6:30 p.m., Fountain will hold a book signing and a presentation about her writing process.