Saratoga Council Meeting moved to PVCC theater due to size of expected attendance, over 90 attend 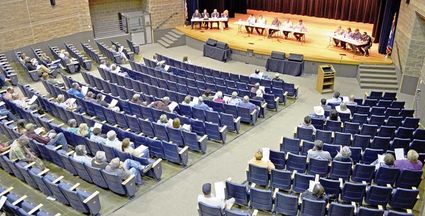 Over 90 people from around the Valley spread across the 400 seat PVCC theater for the June 4 Saratoga Town Council meeting.

Editor's note: Due to the length and breadth of discussion at the most recent Saratoga Town Council Meeting, that meeting coverage has been split into three stories.

If it was the intent of Saratoga mayor John Zeiger to begin a conversation about Valley healthcare by inviting Memorial Hospital of Carbon County (MHCC) to the May 21 meeting of the Saratoga Town Council, then the over 90 people present at the June 4 meeting would make it appear he succeeded. Due to the expected increase in attendance, the Platte Valley Community Center (PVCC) theater served as temporary council chambers.