Healthcare a concern for the entire Valley 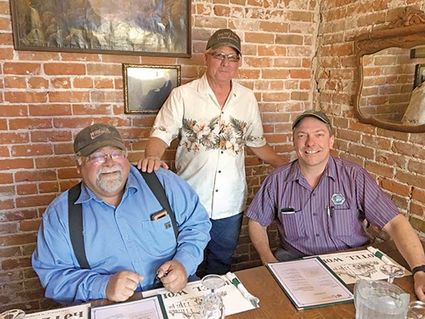 From left, Encampment Mayor Greg Salisbury, Riverside Mayor Leroy Stephenson and then Saratoga Mayor Ed Glode at a discussion of Valley healthcare at the Hotel Wolf on August 28, 2018.

When issues surrounding the Platte Valley Medical Clinic began publicly last fall, I attended a Saratoga town meeting and I was dismayed to learn most all the discussions and possible solutions were being strictly discussed by the Saratoga council, not including the rest of the Platte Valley communities. I spoke after the meeting with, then, Councilman Faust, and impressed upon him the need for the rest of the valley towns to be included in working on a solution, as the Platte Valley Clinic also serves us in Encampment, Riverside and the surrounding rural county residents.

The solution for the clinic needs to involve more people other than just Saratoga. On August 28, 2018, the first meeting took place that included Saratoga, Encampment and Riverside mayors along with others involved with the clinic. A trust and understanding was built at the meeting that we would all work together and assess our health needs of each of our communities and work together to find solutions. The health sustainability council was formed, a health assessment survey was released, people from all three communities provided feedback and attended informational meetings held in Encampment and Saratoga. Whether or not we continue to have a clinic and a nursing home affects all of us. It can be an economic driver for all of our communities as well. There are people who would move to the area if we offered stable health services.

Please, Saratoga residents: continue to work within the ongoing process with the Platte Valley Healthcare Sustainability Project as they are working hard for all of our interest. I understand the clinic is not currently operating under the current contract with Saratoga for the building rental, but destroying the current contract will only exasperate the situation and deny health services to Encampment and Riverside residents as well.

If I was a physician looking at relocating to the clinic, and the Saratoga mayor threatening to pull the contract, I would not find the current situation stable enough for me to relocate myself and my family to Saratoga. We need to continue to work on a solution together and with transparently that will benefit all the Platte Valley residents.