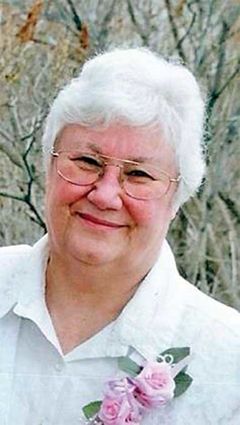 Betty Lou (Cerise) McIlvaine passed away peacefully in her sleep at her home in Saratoga Monday, May 13. The devoted mother, grandmother, businesswoman and civic leader was 78.

Funeral Mass was scheduled for Tuesday, May 21, at 11 a.m. in St. Ann's Catholic Church with Father Jason Marco. Interment followed in the family plot at the Saratoga Cemetery, followed by a remembrance meal served by the Catholic Women in the Parish Hall.

Betty was born July 28, 1940, in Leadville, Colo., to Alvi B. and Elvira (Martial) Cerise and spent her childhood years in that town, graduating from Leadville High School in 1958.

Following graduation from Central Business College in Denver in 1960 she returned to Leadville where she was employed as secretary of public relations for Molybdenum Climax Co. where she met her future husband. She and Robert M. (Bob) McIlvaine were married Sept. 8, 1962 at the Chapel of Angels in Denver. The couple moved to Denver in 1970 and lived there until 1974 when they moved to the Lazy River Ranch south of Saratoga.

Betty and Bob sold the ranch in 1991 and moved to town where they entered the real estate business, acquiring rental and commercial property, which she operated until her death.

Betty enjoyed playing bridge at the Senior Center, took pleasure from visiting with friends and was an avid reader. She loved sharing her time and life with friends and family, especially her children, grandchildren, mother and brother.

Survivors include a daughter, Michelle (husband Mike) McWain; a son, Scott (wife Michelle) McIlvaine, all of Saratoga; grandchildren, Ryan and Sierra Schutte, of Laramie; and a brother, Alvi Cerise, of Saratoga.

Persons wishing to make donations in her memory may do so to the "Saratoga Middle/High School Cancer Walk", P.O. Box 1710, Saratoga, Wyo., 82331.

Jacoby Funeral Home, of Rawlins, is in charge of arrangements.