Encampment students from 7th through 12th grade gather behind Jacob Flowers and Justin "JD" Shaw and their family following their military signing.

For many students, time after graduation is plentiful as they spend the summer preparing for college or trade school. Others, meanwhile, will enter the workforce. A select few, however, make the choice to follow what most would consider a higher calling to serve their country. In Saratoga and Encampment, four students will be doing just that as they join the armed forces.

From Saratoga Middle High School (SMHS), Takoda Pedersen will be joining the Air Force and Shianne Baker will be joining the Army. Jacob Flowers and Justin "JD" Shaw, from Encampment K-12 School, will be joining the Marine Corps and the Army, respectively. Nearly all of them will be shipping out to their respective bases just days after graduation as they head to boot camp. As that day draws closer, the soon-to-be former students have expressed a combination of excitement and nervousness.

Pedersen made the decision to join the Air Force a year ago, though she had thoughts of joining as early as two years ago.

"I was on the fence about it, but then a little bit after that I officially decided," said Pedersen.

The SMHS senior has chosen to pursue Aerospace Medical Services while she is in the Air Force.

"I really just want to be in the medical field and I love helping people, so if I can save a life I feel like that would be awesome," Pedersen said.

She is no stranger to this branch of the armed services, however. Pedersen said that one of her older sisters is in the Air Force, as is her sister's brother-in-law, and the two were instrumental in Pedersen's decision.

"When I decided to go, that's when I started looking for jobs. For a while now, I've really wanted to do something in medical and since I had family in Air Force that's why I decided to go Air Force," said Pedersen.

Pedersen will ship out to San Antonio, Texas on June 4.

"I am very excited. I am also very nervous, though," Pedersen said.

For as long as she can remember, Baker has wanted to be, or do, one of three things; a veterinarian, a truck driver or join the military. Enlisting as a Motor Transportation Operator, she can check of two of those three goals.

"Basically, I'll be a truck driver and I'll be driving personnel from Point A to Point B. Or supplies. I can be stationed anywhere," said Baker.

Baker will head to Fort Leonard Wood, Mo. on June 3.

"I'm nervous, but I'm also excited. Just nervous for the unknown, mainly, and everything that entails with it, but I'm pretty excited for the opportunity I have to be able to go do it," Baker said.

Flowers has joined the Marines and will ship out on June 17, the last of the four to leave from the Valley. While in the Marines, the Encampment senior plans to work as a diesel mechanic.

"I always thought about it when I was a kid, but I realized this is probably something to help me find what I want to do in life," said Flowers.

To begin with, he will be stationed in San Diego, Calif.

"I think I'll get nervous when I get there, but right now I'm really excited," Flowers said. 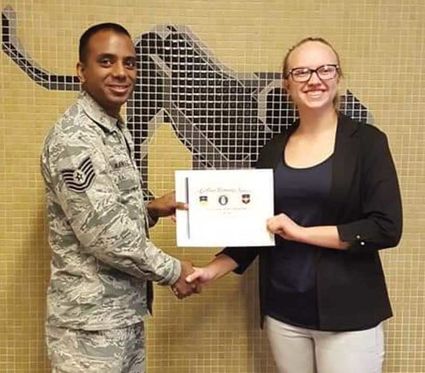 Shaw, like Baker, will be joining the Army, but that is where the similarities end. The senior plans to work as an Apache helicopter mechanic while he is in the service.

It was junior year when Shaw decided he wanted to join the Army.

"I kind of just felt like it would teach me morals and discipline," Shaw said.

Shaw will be shipping out to Fort Jackson, S.C. on June 3.

"I'm excited and nervous. A little more nervous, though, I'd say," said Shaw.

The Saratoga Sun congratulates these four students for making the decision to join the armed forces and wishes them luck.