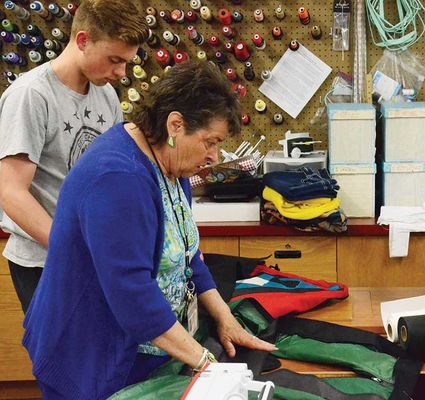 Nobody who has ever had Cheryl Munroe as a teacher calls her "Mrs. Munroe." Those who work with her don't call her "Cheryl." To students and staff alike, she has always been just "Mo." For 36 years, Mo has been teaching Family and Career Science at Encampment K-12 School, along with teaching at Saratoga Middle/High School (SMHS) for the 2018/2019 school year. Mo has taught for 47 years all told, having started her teaching career in Fort Washakie.

Mo is not a native to the Valley, though you wouldn't know it by talking to her. Before moving to Encampment and marrying her late husband, Montie Munroe, Mo was raised on the Wind River Indian Reservation and went to school in Arapahoe before going to school in Riverton. The mother, grandmother and rancher is not like most teachers. She won't sugarcoat things and she isn't what one would call "politically correct."

Her students don't seem to mind either of those things. On the contrary, while many classes have a homeroom, Mo's room is home. Throughout the day, whether in Encampment or Saratoga, students mill in and out of her room as they look for something to eat or grab something to drink. On this particular morning in Encampment, Mo tells students that, with the end of the year approaching, they have permission to clear out the fridge. Kalub German needs no further urging as he sautés sliced mushrooms for a morning snack.

Unlike most classes, Mo's room is a mixture of different grades and different classes, like ProStart 1 and ProStart 2. While some seniors work on homework, students in Textile Arts take a test and Reid Schroeder works on a garment bag. Mo says that Schroeder likes challenges and has only recently taken up sewing. His goal is to complete the bag before taking off for soccer later that morning and it looks like he might succeed.

Later in the morning, before her drive over to Saratoga, Mo talks to a class of 7th grade students about job applications and resumes.

"Do you do the dishes, clean your room or mow the lawn?" Mo asks the students.

She tells the students that the chores they do at home can be listed on applications as previous jobs. Though it may be some time before these students can actually work somewhere, it's not too early to show them the proper way to apply for a job. Mo goes section by section, telling them things they will need to know such as their address or phone numbers.

Lauren Buford, a senior at Encampment K-12 School, is sitting in the room as she works on her homework.

"We had a substitute teacher on Monday," says Buford. "When the students asked to cook something, the teacher said she thought they'd cook grilled cheese or something. Instead, they made crepes and cookies. We've got a heck of a teacher."

Once the morning classes in Encampment are done, Mo gathers her things and gets into a Carbon County School District No. 2 car for the 20 mile drive to Saratoga where she teaches classes in the afternoon at SMHS. Her room at SMHS is similar to the one in Encampment, a mixture of grades and classes.

It's near the end of the school year and there's a lot of testing. Students in Saratoga are taking tests for the National ProStart certification or watching videos on how to properly prepare romaine lettuce or make a soy reduction. With it being the end of the day, some of the students, especially freshman, are finding it hard to focus. Mo, however, is able to keep their attention long enough to reach the school bell dismissing them.

For some of these students, Mo isn't just a teacher within the walls of the school. She also employs some of the kids she teachers out at her ranch where they help her build fence or any other tasks that need completed. She asks the students in Saratoga, those who aren't going to state track, if they'd be willing to help with fencing over the weekend. Many of them seem to think about the offer.

It would be difficult to overstate the impact Mo has had on her students over the years. She's taken students to state and national ProStart competitions, helps them get college credit hours through their involvement in ProStart and even gets them certificates showing that they have experience in the hospitality industry which leads to a higher starting wage when they are out of school.

Some of her current students are getting additional experience in local restaurants like Firewater Public House, Hugus & Co. and the Hotel Wolf. Additionally, some of her former students are pursuing a career in the hospitality industry with some of them working in Casper and Laramie. While all of her students may not pursue a career in some of the subjects she teaches them, they can still utilize those skills in life.

Most of her students would agree, Mo's departure will leave big shoes to fill.