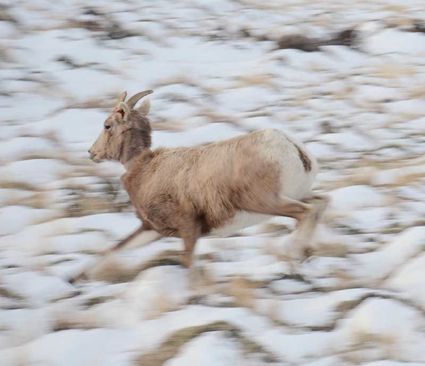 A bighorn ewe runs off following its release.

Walking into Jordan Seitz's classroom at Encampment K-12 School, it is obvious he enjoys the outdoors. The 6th grade homeroom is decorated with furs and skull mounts. A bulletin board on the west side of the room holds articles written about the bighorn sheep captures that Seitz and his students have helped the Wyoming Game and Fish Department (WGFD) with along with photos from those captures.

It's because of that work that Seitz, along with Brady Samuelson of Riverton Middle School, has been named one of two Outstanding Bighorn Teacher for 2019. What started as a conversation between the 6th grade teacher, who also teaches 8th grade science, and former WGFD Saratoga Wildlife Biologist Will Schultz turned into an experience for Seitz's students that went far beyond the classroom and has extended over two school years.

There are some who may be surprised to know that there is a population of bighorn sheep in the area, but the Encampment River herd boasts around 50 ungulates according to recent data from the WGFD.

"It was kind of interesting to see bighorn sheep because I've never seen them before. I never thought they'd be here. You would think they would be somewhere else were it would be hard to find them," said Eckerley Pickett, one of Seitz's homeroom students.

Last school year, February 2018, Seitz and his classes helped the WGFD collar five ewes from the Encampment River herd. The Global Positioning System (GPS) in those collars, however, were not working properly and, in January 2019, Seitz and a new batch of students aided the WGFD recollaring bighorn ewes.

In both the original collaring and the follow-up, Seitz students were able to get a true hands-on experience as they helped cool down the animals, take fecal samples and perform ultrasounds. For some of his students, this helped solidify what they wanted to do when they, eventually, graduate.

"I want to be a vet. I have been wanting to do it for quite some time, since I was in kindergarten. This experience really did help me get more of a feeling of what it would be like," said Zane Butler, another one of Seitz's homeroom students.

Butler isn't the only student who expressed an interest in animal biology. Tyrel Brown, even before helping collar the ewes, was interested in becoming a wildlife biologist.

"My favorite part was when we actually were doing stuff with the sheep, like working with them," said Brown.

Not all of Seitz's students were able to help collar the bighorn ewes, but many of them were able to go on a hike in October as they attempted to locate the Encampment River herd using the Very High Frequency tracking from the collars. The hike become known as the "blizzard hike" as the class saw not only rain, but snow. Despite the weather, the students were able to see a number of bighorn rams.

"It (the hike) was interesting because you couldn't really see them, but once you did get to see them it was really cool because you had hiked all that way," said Josie Little.

"It was pretty cool because we got to go hike out in the wilderness and see the bighorn sheep," said Baylin Sifford

The students in Seitz's homeroom class all said that they get out and enjoy the wilderness around Valley already, but getting out with Seitz and the WGFD has helped them come to appreciate the outdoors even more.

"I like to go outside more and see more animals," said Ashtyn Tieszen. 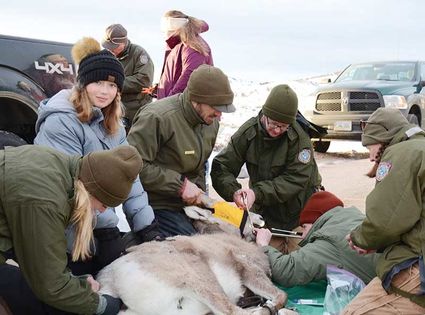 Ashtyn Tieszen looks up from helping perform tests on a bighorn ewe.

It is the task of a teacher to try to make a positive impact on their students. With some of his students even more interested in pursuing a career in wildlife biology, or being a veterinarian, or enjoying the wilderness more, it seems that Seitz has been able to do that just that. The press release from the Wyoming Wild Sheep Foundation and the National Bighorn Sheep Center highlights the importance of what Seitz has been doing.

"Brady and Jordan, along with the 'herds' of students they lead, are a vital part of a team of scientists, managers and conservationists that strives to insure the future of bighorns, which exemplify Wyoming's most wild and rugged landscapes. Through this bighorn team, the students are given the opportunity to develop an understanding and conservation ethic regarding bighorns and other wildlife species. Moreover, we learn from Brady, Jordan and their students about how to better connect with our youth and gain their interest in conserving Wyoming's amazing wildlife."