Despite a low voter turnout for special election, Specific Use Tax passes with 75 percent of vote 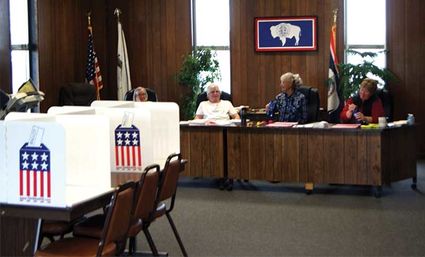 The lines were not long in Hanna Town Hall as volunteers wait for voters on May 7. From left, the volunteers are: Eva West, Dorla Baker, San Koenke and Valerie Black.

Unofficial results from the May 7 special election on the One Percent Specific Purpose Sales and Use Tax (6th penny tax) showed an overwhelming support for the tax at the polls when they were initially released at 8 p.m. Out of 1,634 ballots cast, 1,236 of them were in favor of the 6th penny tax and put the approval at 75 percent. Only 398, or 24 percent of ballots cast, were against the tax.

When official results were released by Gwynn Bartlett, Carbon County Clerk, the following day, those numbers held up.