Volunteers get the products ready for the distribution in the gym of the Hanna Recreation Center on Friday.

Two months ago, the Hanna Recreation Center played host for people to get free food for the first time in Hanna (See "Food boon" on page 6 in the March 13 edition of the Sun). The Wyoming Food Bank of the Rockies truck went to Medicine Bow last month, but at 10 a.m. on Friday it was back in Hanna and the town will be the monthly distribution point for northern Carbon County from this point on.

The driver of the truck, Jens Christensen, has delivered to Medicine Bow before, but it was his first time in Hanna. Christensen is based in Casper and drives for The Wyoming Food Bank of the Rockies five days a week to different communities in the state. Christensen said he goes to larger places, like Cheyenne and Gillette, along with smaller towns like Hanna.

"I travel the entire state delivering food and meet a lot of people," Christensen said. "This is a job that feels good to do."

As the truck was unloaded, there was fresh fruit, vegetables, dry goods, gluten-free bread, desserts, beverages and chicken. Volunteers took what came off the truck and quickly put it on tables with little signs indicating how much of the product was available for each household.

Once a family or person registered at the door, the line moved quickly as products were portioned out to each household. The sign-in is to gauge how many people are served and if more food is needed on the next distribution.

"This has been one of the largest turnouts according to volunteers that worked Medicine Bow," Vivian Gonzales, Hanna Recreation Center director said. "The final count was 381 people."

She said there was little left over food, which volunteers from Medicine Bow indicated did occur when the truck went there.

Hanna was picked because it's location was easier for people from all over Carbon County to get to versus Medicine Bow and Rock River, where the truck had gone before.

The line of almost 400 customers got served in about an hour as the last person came into the gym where the food was being distributed. 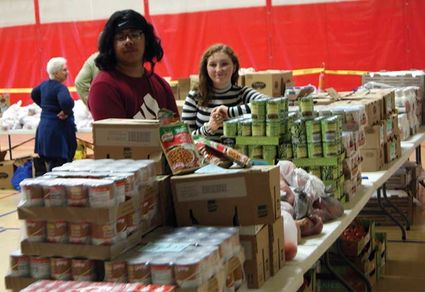 From left, Volunteers DJ Cruz and Charlee Solaas get ready for the crowds amid stacks of canned goods.

"We served a lot of families today," Gonzales said. "It took us an hour to set up and an hour to serve all the people who came."

Gonzales was happy with the outcome of serving so many people in a timely manner. She credits the volunteers.

Christensen said this was one of the largest crowds he had seen in his trips to northern Carbon County.

"Wyoming Food Bank of the Rockies can really make a difference to families and it feels good to be a part of it," Christensen concluded.

The truck will come to the Hanna Recreation Center every second Friday and food will be distributed, as long as the truck arrives on time, at 10 a.m.