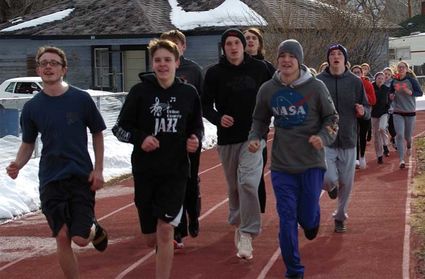 The girls and boys track and field team practiced together at the Hanna elementary track a couple of days before the Wind River Invite that was held on Saturday March 16.

The Hanna, Elk Mountain, Medicine Bow varsity track and field team went to the Wind River Invite in Pavillion on March 16 and came away with some strong performances from team members.

There were 15 schools that competed at the event. The boys team placed 5th in 15 events and the girls team came in 9th after 16 events. The two teams combined to come in 8th overall.

Scott was not the only girl to score points for the team.

For the boys team

The McGraw twins, Conor and Shane, both had a first place finish.

The next scheduled event will be the Wheatland Invite on March 30.