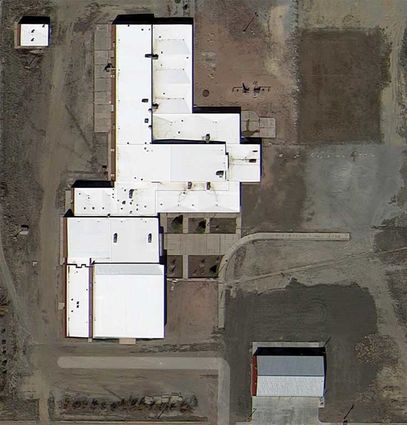 As shown in this photo, the distance between the old Medicine Bow High School and the Medicine Bow Fire House is restricting access for Viridis Eolia, the company that now owns the old high school.

As the number of wind energy companies interested in the area in and around the small town of Medicine Bow, the requests to lease property has continued to increase. During the last meeting of the Carbon County School District No. 2 (CCSD2) Board of Trustees on Feb. 20, the board members listened to a proposal for such a lease from Dean Byrne via phone.

Byrne, owner of DDV, LLC., a Cheyenne, Wyo. based company, made the proposal on behalf of Viridis Eolia, a wind energy company that already has some familiarity with Medicine Bow. The company, which has offices in Cheyenne but is based in Ve...