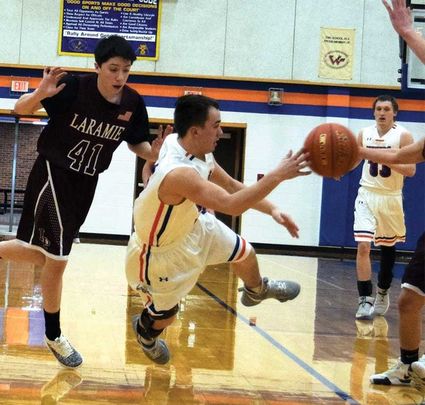 Basil Phillips passes the ball away before going to the floor in the game against Laramie Sophomores on Feb. 19 at HEM.

Before going to regionals on the weekend, the Hanna, Elk Mountain, Medicine Bow (HEM) High School boys basketball team had a game against the Laramie Sophomores on Feb. 19 where they won 54-51.

"We got to play a lot of kids," Head basketball Cliff Jones said. "We would go up by 10 points and I would put some players in and then the lead would go down and I would put back in starters."

He said this afforded him the opportunity to put in players that don't see a lot of time on court.

"We don't usually play right before regionals, so this was a great chance to have all the kids get some time i...