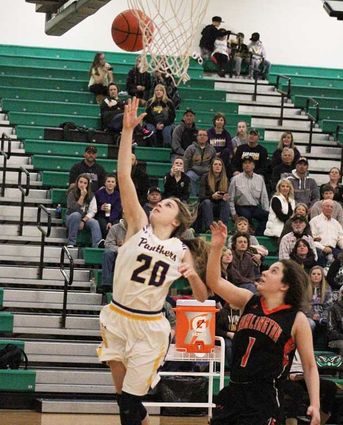 Savannah Wells goes up for a basket against Burlington during the regional tournament.

For the first time in 13 years, the Saratoga Lady Panthers were able to make it to the 1A West Regional Tournament. While they didn't make it past the Consolation semi-finals, Heather Bartlett, head coach of the Lady Panthers, said that not only was regionals a great experience, but that she was as happy Saratoga was able to go to the regional tournament.

Before the Lady Panthers could go to Lander to compete in the tournament, however, they had to play a pigtail game against the Encampment Lady Tigers on Feb. 18 at the Hanna, Elk Mountain and Medicine Bow High School. Following an intense first half that saw both keep within a basket of each other, the second half was a catalyst for the Lady Panthers following three 3-pointers in a row from junior Taylor Bennett.

"One of my assistant coaches this year kept telling the team all season that it's not how you start, it's how you finish," Bartlett said, "and I feel like that is very applicable to our girls this year."

The first game for the Lady Panthers was against the No. 1 Northwest St. Stephens Lady Eagles. Saratoga and the Lady Eagles had not played each other at all during the regular season, but Bartlett was still pleased with how the girls played against St. Stephens.

"St. Stephens is a really good team that shoots the ball really well," said Bartlett, "but I felt like we executed our game plan and played pretty well, we were just up against a little better team."

The Lady Panthers ultimately lost to St. Stephens with a final score of 48-67, which placed Saratoga in the Consolation bracket where they faced the Burlington Lady Huskies.

"Our second game against Burlington was our best game of the season," Bartlett said, "the team played amazing with even scoring from many players and a great effort from the entire team. This was hands down our best game of the season with multiple players having personal bests during that game. Shianne Baker and Melissa Pindeo both had the best games of their careers and I am really happy for both of them."

The only time that Saratoga had faced the Lady Huskies was in December at the Wrangler Invite in Shoshoni. There, the Lady Panthers were victorious over Burlington with a score of 50-38. In a similar fashion, Saratoga defeated the Lady Huskies 65-44 in the Consolation quarter-finals.

Knocking the Lady Huskies out of the tournament, Bartlett said she was confident going into their game Saturday against the Little Snake River Valley (LSRV) Lady Rattlers.

"Come off that game going into our game Saturday, I felt great," Bartlett said. "I felt like we had a really good chance at making it to state."

Anything can happen at regionals, however, and several of Bartlett's main players were sick with the flu beginning Friday night and going into Saturday.

"We just couldn't quite put the effort forth that we had been in previous games the last two weeks. Also, we couldn't get any shots to fall," said Bartlett, "but, again, I feel like that was being influenced some by players not feeling 100 percent. But, that is what happens with sports, there are always things out of our control and you just have to do the best you can with the situations you have."

LSRV would, unfortunately, end Saratoga's chances of going to the 1A State Championship as they ended the game with a score of 28-48.

"Overall, I am extremely proud of the way my team played the last part of the season and at regionals, we were right where we needed to be to make it to state," Bartlett said. "I have a great group of juniors and sophomores coming back for next year who all played major varsity rolls on the team this year."

The Saratoga Lady Panthers season comes to an end at 5-17 for the season and 1-7 for conference.