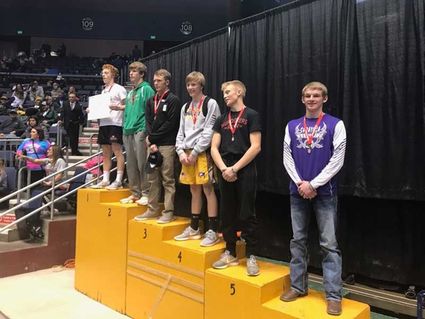 Andrew Everett is all smiles as he stands on the podium having taken sixth place at State.

The Saratoga Panthers wrestling team went to State where senior Andrew Everett placed sixth in the 138 weight class. Head coach Zach Schmidt said he was incredibly happy with his grappler.

"What Andrew did in this last month was take part in a game plan-and he stuck to it," Schmidt said. "He peaked at absolutely the right time."

Schmidt said there was strong physical preparation put in by assistant coach Tom Stockwell. Schmidt said that Everett had wanted to get to the podium and looked to his coaches strategies.

"For him to go to Regionals and place at State he was going to have to go to...