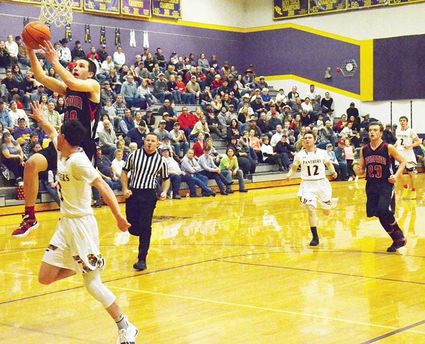 Encampment Tiger Dalton Peterson goes for a layup in Thursday night's win against the Saratoga Panthers.

The Encampment Tigers remain No. 1 as they head into the 1A West Regional Tournament following a slim victory against the Saratoga Panthers (10-9, 2-6) on Thursday. Along with their win against the Panthers, Encampment was also successful against the Rock River Longhorns (6-12, 2-3) on Friday and the North Park Wildcats on Saturday for their final home game.

While originally scheduled for Jan. 31, the rematch between the Tigers and Saratoga was moved due to the rescheduling of other games. On Thursday, Encampment entered the Panther Den and delivered a heartbreaker...