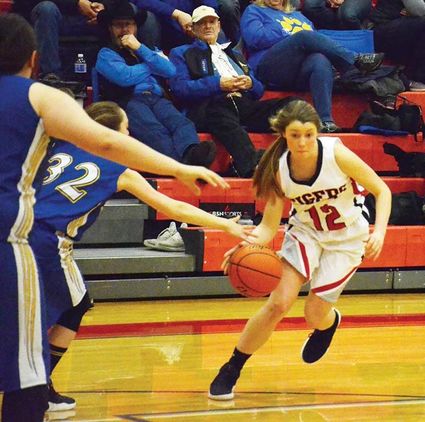 Lady Tiger Shiann Finney works to get the ball past the North Park Lady Wildcats on Saturday.

The Encampment Lady Tigers suffered a loss to their Valley and conference rivals, the Saratoga Lady Panthers (4-15, 1-7) on Thursday evening, but were able to celebrate a victory on their final home game of the season as they hosted the North Park Lady Wildcats on Saturday. Between those games, Encampment traveled to Rock River where they were hosted by the Lady Longhorns (19-2, 4-1) and suffered another loss.

While the Lady Tigers were able to celebrate a win the first time they faced Saratoga on Jan. 4, the second matchup was not in Encampment' favor. While the L...