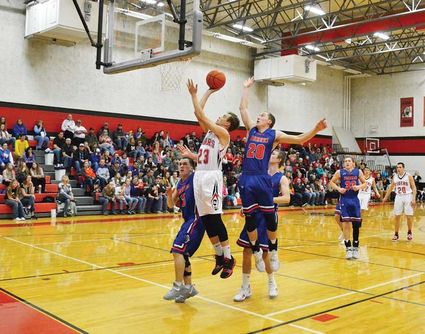 Encampment Tiger Kyler Miller goes up for a shot during Saturday's game against HEM as Miner Conor McGraw attempts to block.

As they celebrated their homecoming week, the Encampment Tigers achieved two victories in front of the hometown crowd as they hosted the Cokeville Panthers (10-4, 1-2) on Thursday and the Hanna, Elk Mountain and Medicine Bow (HEM) Miners (8-6, 2-0) on Saturday. This was the second venture in the Valley for Cokeville and the second lost dealt to them while here. While the Tigers trailed for most of the game and it looked like it might enter overtime in the fourth quarter, the Encampment boys pulled out the victory in the final seconds of the game.

The last time the...